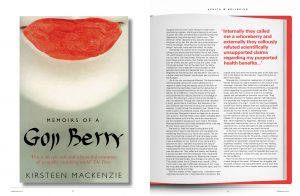 Suppose that you and I were sitting in a quiet room overlooking a garden, chatting and sipping at our cups of green tea while we talked about something that had happened a long while ago, and I said to you, “That afternoon when I became a Goji…was the very best afternoon of my life, and also the very worst afternoon.” I think the things I remember are more real than the things I now see, more real than what I am today.

I remember the warmth of an unwavering breeze licking at my leaves with the faintest hint of salt. Damp rich earth beneath me and the bright sun above pouring into my veins. Life was simple, living was it’s simplicity and change was it’s enemy. But change was coming as sure as winter and as I grew in size and colour I was introduced to pain. Torn at the neck from my fellow wolfberries I was subjected to discrimination on the grandest berry scale and separated from my sister. Regarded as something new and beautiful I was cast to a higher caste and feared I would never see my home or family again.

Life in the city was beyond different. The discrimination continued daily with a strict regime of clean living and tonic Organochlorine pesticides beauty products, far above that of the other more experienced berries and all the while at their behest. As a wolfberry I was the lowest of the pack and condemned for reasons beyond my knowledge and control. But despite all their harshness, no other berry was as cruel as the blue berry. Through her, who I so admired, I learnt what influence a fresh and perfect berry could have. But with her, that influence was only ever to bring me hardship. It was even through the blue berry that I had heard of my sisters grave circumstance; slowing drying out in the sun for all to see. Resigned to become cheap tea for anyone with a penny. The heart dies a slow death, shedding each hope like leaves until one day there are none and you are too crippled to escape your own misery. No hopes. Nothing remains but your body shredded in a tea bag. But Her future was not mine.

We lead our lives like water flowing down a hill, going more or less in one direction until we splash into something that forces us to find a new course. The ice was my something. A piece of frozen privilege usually reserved for the more established berries became mine. I was a wolfberry on ice, the first of my name and to become the last. I had been touched with a brush of hope as though a breath of sun had opened my flower. I embraced the new world and the transformation that was set upon me. They called me healthy and healing, a natural wonder. They made campaigns for me, made plans for me and called me Himalayan. They labeled me a super fruit, and changed my name to Goji. They even claimed that a Chinese man named Li Qing Yuen lived to the age of 256 years thanks go me. I was the most desired berry on the market and my song was heard far and wide. With a wealth of new opportunity I wondered what I might become and who I might become to someone. But a good song sung only ever sounds as good to the right ears, and to those of the other berries I was nothing but an alarm bell ringing.

The strawberries, cranberries and all manner of other berries followed the blue berry into the depths of a vicious smear campaign. Internally they called me a whoreberry and externally they callously refuted scientifically unsupported claims regarding my purported health benefits. They loudly reported that my level of vitamin C is nothing special and in fact comparable to many citrus fruits and strawberries. They personally attacked my hygiene saying I had high levels of insecticide and fungicide residues and even said I was lying about my origin. I could no more have stopped myself from feeling sadness than you could stop yourself from smelling berry juice that had been puréed on the table before you. Was I as fake as my new name, or something more? It was decided a doctor would determine my purity, but his intentions we as impure as city dirt. After the release of his glowing review I was back on the market. But I never regained my happiness. Adversity is like a strong wind, tearing away from us all but the things that cannot be torn, so that afterward we see ourselves as we really are, and not merely as we might like to be.

In the end it was the impure doctor who purchased me and where the exploitation began. I was juiced and exctracted to be enjoyed by thousands, a scent, a flavor, a chemical equation sold under the banner of Goji. I was an additive, an essentially unessential element of your superfood sundries. I was everything, and I was nothing. Sometimes we get through adversity only by imagining what the world might be like if our dreams should ever come true; but imagining I was the heralded Goji was not the same as being it. I could only see, and will only be, the wolfberry.

Now I know that our world is no more permanent than a wave rising on the ocean. Whatever our struggles and triumphs, however we may suffer them, all too soon they bleed into a wash, just like a watery berry coulis on paper.