Today, skiing in the Alps is a far cry from its first incarnations, and incontrovertibly more glamourous… 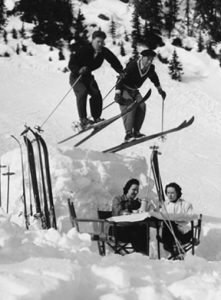 From the British royal family to her Majesty’s favouite spy, skiing in the Alps today isn’t just a sport, it’s a British institution. Before ‘plowing’ into how Sir Arthur Conan Doyle[1], the author of Sherlock Holmes, brought skiing for sport to Switzerland…Let’s ‘schuss’ into primitive man’s method of strapping sticks to their feet as a means of moving across the tundra for hunting.

The Paleolithic Period is the earliest period of human development, which lasted until approx 8000 BC. In the 1960s archaeologist Grigoriy Burov discovered fragments of ski-like objects which date back to 6000 BC in northern Russia[2]. Their use is documented in cave drawings at least 5000 years ago, which show skis were being used by hunters and trappers as glaciers retreated during the stone age. Pre-historic hunters were using an early version of ‘skins’ to follow reindeer and elk herds by covering the planks strapped to their feet with fur, the same function as the modern equivalent used in ski touring today. [3]

We can’t move forward in time without also harking the Nordic ski myths, which are plenty. The goddess Skadi is one legend all ski minded women should hold dear; for she left her husband Njord for the love of skiing. Officially Njord couldn’t stand the dreary cold of the mountains, unofficially there was no place for ski in their wedlock and the marriage failed.[4]

Throughout the middle ages skis remained in use across Central Asia and Europe as a means of practical transport in regards to hunting or agriculture. Their use would not evolve until the Norwegian military began to expoit the planks, at first in general operations throughout the 1700’s and then in 1760 with the first army ski skill competition. The competition featured events which were precursors to the first winter Olympic sports, later destined for Chamonix Mont Blanc. The men were tasked with downhill skiing, dodging trees and speed across level snowfields while shooting. [5]

This evolution from function to adrenline, from cross-country skiing to alpine downhill skiing, is what eventually made the Alps the heart of the skiing world.

When it comes to boosting the sporting and leisure stakes in the region, the Alps have two main characters to thank in the 1800s. In 1878 Grenoblois Henri Duhamel discovered skis on show at the ‘Universal Exhibition of Paris’, he invested his time and money to grow their popularity and design aspects in France.[6] Meanwhile, English author Sir Arthur Conan Doyle introduced the sport to Switzerland in 1893 when he settled on the region in aid of his wife’s ailing health. It was reported at the time that Switzerland was home to an agreeable climate for those suffering from Tuberculosis. Given only months to live in England, with some Swiss air and Sherlock Holmes worthy skiing, Louise lived until 1906. Sir Arthur wrote, “the time will come when hundreds of Englishmen will come to Switzerland for the season.” [7]

At the turn of the century, and across the Alps, skiing in Switzerland was tied closely to wealth and tourism of the bourgeois nature. In 1907 the Swiss government was determined to change that, but in such a way as to keep their investment from upsetting the class system. As such, they hid their investment for the sport in the military. In 1912 a military delegation became part of the central committee of the Swiss ski association, along with 20,000 Francs. With enlistment compulsory in Switzerland, the civilian objective mixed nicely with the military objective and the result was the promotion of Swiss skiing for the next generation, and those to come.[8]

Italy had meanwhile militarised skiing 40 years prior in 1872 with the ‘Alpini’ units, the oldest serving mountain troops today. Their original mission was to defend the mountainous Northern Italian borders from France; During World War 1 88 Alpini Battalions were raised to fight an all conditions of the highest regions of the Alpine Arch. [9] Right here while walking the Tour du Mont Blanc you may still cross these troops, or their Swiss and French equivalents discretely patrolling or carrying out training initiatives.

Notably for yhe French alpine military the École de haute montagne (High Mountain School) was established in Chamonix in 1932. It is considered the world’s first specialist training school for the leaders of alpine troops. The Briançon skiing school, also established in 19th century France, today trains the regions troops to patrol and defend the south-eastern frontier between France and Italy.

The true turning point for the sport, in the view of the public, was when all eyes descended on Chamonix Mont Blanc in 1924 for “The International Winter Sports Meet”. The event was a marked success for the popularity of downhill or Alpine skiing, as well as that of ski jumping deemed ‘spectacular’.[10] The Olympic Committee built on the triumph of the games announcing a regular event one year on, and retroactively considering the Chamonix games the first official Winter Olympic event.[11]

The event worked to glamorise skiing, and more Brits than ever before decsended on the Alps to ski…and haven’t stopped since.[12] Adding to the glamour, skiing the Alps has been taken to the World stage by many factions of the modern British royal family and even James Bond himself.

While the royals ski Klosters, Verbier and Courchevel[13], Bond, James Bond, had his sights on Mürren and even Chamonix.

The Mürren ski area is one of the oldest in Switzerland and James Bond fans may remember the futuristic revolving restaurant on the Schilthorn as the imaginary ‘Piz Gloria’ in the 1969 movie “On Her Majesty’s Secret Service”. [14]

Chamonix was meanwhile enough for Pierce Brosnon in 1999’s “The World is not Enough” which was shot in Chamonix.[15]