How To : Ensure no one is F* SAD this holiday season 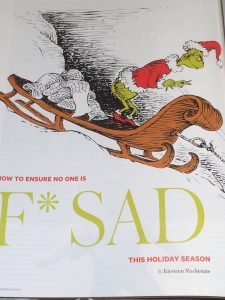 Festive* Seasonal Affective Disorder, like the weather related variety, is a real phenomena that can emotionally overwhelm certain individuals or social groups during what is supposed to be “the most wonderful time of the year”. Symptoms are varied and each variety requires a unique approach, here are some you may encounter this Christmas-New Year…

At any time of year one can easily spot an Eco Warrior draped in one too many organic cotton scarves and sporting drop-crotch hemp slacks, the F* SAD varietal however is often a deteriorating book with an under the radar cover. F* SAD Eco Warriors can take months or even years to “crack” and go full Vegan, until that moment you will notice them grow increasingly uncomfortable, concerned and saddened around the holidays. This group is likely to start questioning the origin of your meat, the nature of your wrapping paper, and the intention of your thoughtfully thoughtless commercialism. You must allow these bleeding hearts to influence your holidays in a small but obvious way to prevent a total identity crisis. Try gifting them, or their children, a certificate commemorating the life of an animal you saved (by way of donation) to counteract the entire pig you are about to consume. This year you could even try burying your gifts under a genuine tree, as opposed to wrapping them under a dead one. Afterall, it’s probably wrong to pillage the planet in celebration of Christmas. But if pillage we must, we should at least do it efficiently.

Hospitality by name is often inhospitable by nature, even more so during the holiday season. Working through a splendid summers day will give any desk jockey cabin fever, working through a splendid summers day providing the exact services you’d rather be receiving is the catalyst for F* SAD in this industry. For the over-tired, over-worked and generally hung-over hospitality worker, serving people whose one day out socialising a year turns them into a complete moron is literally enough to make them sick. There should also be a legal limit to the number of corporate Christmas parties Exasperated Hospo Workers can be an unwilling party to. No one is built to witness nature’s most vomit prone science experiment weekly for two to three months. If you are noticing a seasonal disdain, downheartedness or disgust in your colleagues, friends or employees, take heed the only antidote is also the forbidden word marriage of this industry; ‘unscheduled’ and ‘time off’.

Holidays are a time of togetherness, if two become one as the result of a break up F*SAD can swoop in faster than an opportunistic ex. Firstly, keep the recently single and seasonally mal-affected away from their exes, secondly remind them they can consequence-free kiss just about anyone on January 1st at 0:00hr. The best defence against painful memories is a playful imagination…or exorbitant psychiatry fees.

No one group is closer to the edge of an F* SAD crisis than mothers, including your mothers mother, and particularly your mother in law. They are not only responsible for the majority of gift buying, wrapping, tree dressing and mouth feeding, their own received gifts are always a well intentioned disappointment. The added obligation of making the in-laws feel welcome in the relaxed and carefree façade of their own personal hell will dial her emotional turmoil to boiling point. Keeping your mother positive and calm is not dissimilar to preparing pasta; to keep the water from boiling over you need to add olive oil. To keep your mother from boiling over you need to add alcohol. Tis’ the season. Alternative remedies to the pressure on Mothers is a robust application of realism, appropriated yuletide glee, and forgiving the ghosts of Christmas past.

By the time you notice them it’s too late. Your office martyr will be caught turning up late to the annual Christmas party because they’re the only one who puts in any effort around here, and at this rate they’ll have to cancel their flights home for Christmas they’re so busy and no one understands. The Office Martyr is prone to an F*SAD meltdown that will a result in a highly regrettable performance at the open bar. Unfortunately the sole pre-curser to their festive sensitivity as a Secret Santa overachiever is, secret. The Martyr is certain to take the $20 limit as a suggestion, lovingly crafting the most thoughtful present conceivable, only to be upset when they get a generic gift from Typo. You cannot prevent an Office Martyrs emotional melt down and terrible decision making but you can put them in a taxi before they start twerking against the CEO.