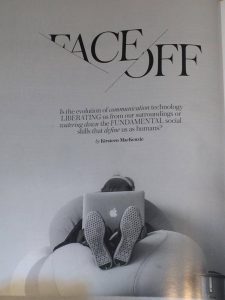 One of the best things about the internet and also one of the most dangerous things about the internet is that it allows us to get entirely wrapped up in that world, without having to pay any attention to the world that’s actually around us. This is a reflection of the way we now communicate with it, how we are both intensely connected to it, yet vastly disconnected from ourselves, and others.

money for services, then use that money to buy more services and clothes and houses and instagram followers etc. But society consists of more than just that. Without love, without affection and companionship, celebration and grieving, life often feels meaningless. Extreme isolation and mixed message emoji’s have been known to drive people insane.

Younger generations are more involved with technology than ever before, and it will be years before we see the larger effect on their social skills. Meanwhile with the constant demands of social media and rapid speed of interaction, this generation’s need for instant gratification and loss of patience is already evident. So evident in fact telecoms are trying to cash in on it with friendly strangers offering parental advice riddled with sales messages fit for the digital age. On the other hand, there is evidence to support the theory that many of the young people growing up hyper-connected to each other and technology (counting on the internet as their external brain) will be nimble, quick-acting multitaskers who will do well in their new world.

Economist Simon Kuznets has a famous theory about the evolution of technology effects known as the Kuznets curve: “First-generation tech usually causes ‘net negative’ social effects; second-generation ‘net neutral’ effects; by the third generation of tech—once the tech is smart enough, and we’ve got the interface right, it begins to reinforce the best behaviors—we finally get to ‘net positive’ effects,”. He believes by we’ll be early into conversational interfaces and artificially intelligent agent technologies (as in the movie “Her”) by 2020. The drawback by this point? Us. We’ll be more willing than ever to relax and remain distracted by entertainments amid accelerating technical productivity. Meanwhile the children of this generation will begin to be seriously intelligently augmented by the tech. According to futurists, as machine intelligence advances the first response of humans is to offload their intelligence and motivation to the machines. This is a dehumanizing, first-generation response and one we’ll start to see more and more of. Only later the third-generation will correct for the near Huxley “Brave New World” we’ll find ourselves in, the age of entertaining distractions that’s right around the Japanese bend.

Right now we’re in a global phase where superficial technologies give us the illusion of companionship without the demands of friendship; where we are alone together. Long gone are the days when the majority of couples met through serendipitous circumstance and face-to-face opportunities, more and more people are becoming actively involved in the online dating game, and more recently Tinder. In fact, for the first time in history, face to face interaction has dropped to third behind texting and IM/FB messaging. Thankfully we want to have social interactions; regrettably, we don’t want to go through the trials and tribulations of real world interactions. It is these complexities in interaction that help us adapt to different social situations in the future, and something that social media is not preparing us for. Generally speaking as long as sex, food and alcohol exist (not necessarily in that order) there will always be an element of face to face interaction present in our lives. We need to be prepared for it, and generally speaking the generations beyond those capable of enjoying this magazine are not.

Schopenhauer had it right: “Life may be compared to a piece of embroidery, of which, during the first half of his time, a man gets a sight of the right side, and during the second half, of the wrong. The wrong side is not so pretty as the right, but it is more instructive; it shows the way in which the threads have been worked together”. As infants to adolescents, we see technology and the world as the right side, optimistic and comforting. As we mature, we come to see the world in more complex ways, realizing, for example, that beyond black and white, there are shades of gray; Behind every connection there is a thread, crossing others like it, sewing a story of our self. For those whose physical existence and construction of self have developed totally detached, the second half of their life will unravel at the seams. Upon turning to the other side of the embroidery the connections won’t be there, the stitches throughout the first half of their life weren’t real, and the ideal picture they’ve filtered so hard to create will disintegrate when faced with the intricacies of adulthood.

But the future is not all German philosophers and dystopian literature, it’s what we make it. I feel the impact of advancements in communication and technology on our lives, can only affect us if we participate mindlessly. It’s really amazing what happens to people who go through their days without a disciplined mind; The world goes on affecting us without many of us stopping to experience it consciously. I believe the truth is that we can choose how technology affects us to some degree, just like the many other things in life, but only if we are actively aware of it. Only if we stop, reflect, evaluate and realise mum and dad are both on their phones over a silent dinner table.

Also, let’s not create an artificial intelligence system called Skynet that we let run amok in our military structures.