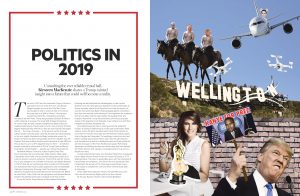 Written by Kirsteen MacKenzie in July 2016 for The Denizen Magazine

…Like Ronald Raegan brought an end to the Cold War, Trump has brought an end to Americas war on terrorism, now a wall on Mexico. Having been ousted from NATO for a metaphorical shirtless horseback ride with Putin, Trump has grounded (docked) all military outfits stateside to oversee the great wall of illegal immigration. At a meter high the wall is largely symbolic, albeit policed by re-appropriated drones. Mexico paid for lunch, once. Formerly the 3rd biggest trading partner with the U.S they are now ironically the largest, U.K (loner of Europe) is the second and for all its eye-rolling Canada can’t keep away. Currently the Peso has equal standing to the dollar and illegal immigration across the border to Mexico has been rising steadily since the turbulent “ban the muslims” first year in office. Muslims aren’t banned as of April 2018, but they do have to carry a GPS chipped license on them, an initiative broadly criticized for the benefit of 10% off Trump Hotel and Resorts bookings for all card holders, pundits say it should have been 20.