“The Nuclear family is dead, in it’s ashes a fire is burning.” 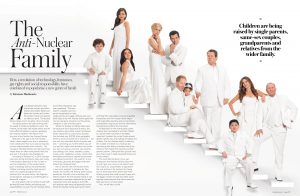 How a revolution of technology, feminism, gay rights and social responsibility have been mixing to popularize a new genre of family.

As archetypes between male and female, mother and father, mother and mother, father and father blur further and further, the modern family has reached an inflection point. The Nuclear family is dead, in it’s ashes a fire is burning.

The global psyche has been evolving with the speed of facebook updates for years. The internet, Social Media, the handheld and the home office all helping inspire a paradigm shift of idealism. The fall out? The structure of our families has inadvertently changed forever.

Welcome to the age of the Anti-Nuclear Family, where happily ever after is incessantly more complicated than Mum, Dad and two kids, but also impressionably more colourful. Where the increase in blended families and step-parenting means there are often more parents than kids, and mum is the gluten free breadwinner.

According to statistics nz in 2015 marriage rates were diving and divorce rates were rising. In the new born baby face of this it’s easy to see the composition of the modern family grow increasingly diverse and multifaceted. Children are being raised by single parents, same-sex couples, grandparents and relatives from the wider family. Like forgotten contraceptives marriage is an afterthought, or worse still a regret.

In a two parent unit it’s common to see both working full-time, flexibly, and sharing care responsibilities. As such, the Anti-Nuclear family has birthed the phrase “tag team parenting”. The term doesn’t uniquely cover two-parent households, but also single parents who juggle childcare and work. Both sides of the Anti-Nuclear family agree that not one sole party should act as the primary caregiver, or “stay at home” parent.

Where the Nuclear era family ideals were introspective and irrespective of others, this new model is going tribal. Ancient traditional family values drew a circle around yourself that included your ENTIRE tribe, geographic territory and environment (at a minimum) – not just your tiny immediate family of spouse and kids – you would think before you act in a way that might cause problems not just for you, but your spouse, your kids, your parents, your siblings, your nieces, nephews, cousins, uncles, aunts, neighbors, society, countrymen, immediate environment, regional environment and global environment. You would try to live in harmony, genuinely the biggest motivator behind the instagram filters.

Not to mention the Anti-Nuclear Family is ever more poignant in Aotearoa for their literally anti-nuclear, left leaning, green eating tendencies. Grace of the technology that helped create it the Anti-Nuclear family is well researched, or perhaps influenced by the well researched, to be anti-paraben, anti-GMO, anti political right wing and generally cynical. Where the Nuclear Family goes hand in hand with Mad Men, disposible income and gullible housewives, the anti-nuclear family aligned with responsible spending and environmental consideration, yoga mums and the “alternatives” (perspectives, politics, food, incomes).

Furthermore, for the anti-nuclear parent, allowing their counterparts and their children to cultivate their true selves is incredibly important. Consider the current furor around gender-specific toys and clothing for babies and children. The anti-nuclear family is reducing the number of children to a minimum but maximizing their ability to develop free of the influence that shaped their parents parents. Letting the kids “go bush” and grow “free-range” replacing picket fences and Sunday whites.

The most defining factor of our own homegrown Anti-Nuclear families (and why he won’t give you/she doesn’t want that ring) is our unique ability to appreciate the now and live in the moment. Our being part of Generation Rent doesn’t just mean eluding income that could be used to pay off a mortgage – it means we pull each other closer together today because that future tomorrow feels (and is) out of reach alone.

…also, we hate a cliché.